Due to the severity of the several winters before last winter, all in-ground fig trees here were top-killed to the ground each of those winters, apart from trunks and limbs bent over to the ground and buried in mulch (all of which survived, as they do every year).

However, last winter (2016-2017), temperatures dropped only to 3 degrees Fahrenheit (-16 Celsius) a couple times, a mild winter here that allowed the wood of the fig bushes’ trunks and limbs to survive up to 4 feet above ground on many of the bushes, including trunks and limbs up to a maximum of 4 feet high on all of the bushes on relatively dry or well draining banks. The bushes at the bottoms of the banks or on more soggy banks all died back to the ground again last winter. Wet in summer, dry in winter for figs in harsh climates. (Sergio Carlini at Planet Fig explains.)

Remains to be seen if any above ground fig wood will survive this winter where temperatures have bottomed out so far at -6 Fahrenheit (-21 Celsius). 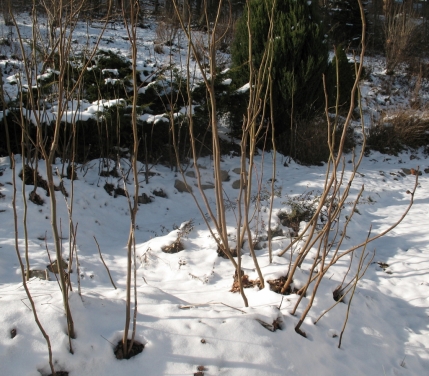